Here are a few words about myself, so that you can get to know me. I am one of six kids and I was raised in El Paso, TX. Both of my parents were in the Army in Texas where they met and got married.
My dad later became a lawyer and also a permanent deacon in the Catholic Church. My dad died fairly young at the age of 49. This was a very difficult time for us, so we moved to Kent, WA to be near
my mom’s family. My mom was raised in Ballard, so all her family still lived in the area. There are times I miss Texas, but I truly love living in Washington, we have been here now for over 25 years.

I did not want to be a priest when I was young. I wanted to be married and have 10 kids! I always loved living in the “loving chaos” of a big family. I received a BS in Mechanical Engineering from the
UW. But while I was in my last year there, I knew that I wanted to spend my life helping people and I had developed a true appreciation and respect for our police officers. I began to look into becoming a police officer and I tested with a police department. At the same time I was really growing in my faith. A person at our parish introduced me to praying in Adoration before the Blessed Sacrament. This
quiet time with Jesus changed my life forever. I fell so in love! Because of this, I asked God for the first time in my life what He wanted me to do with my life. This was the scariest question I ever asked God.
Before that I had never asked God what He wanted, I always just told Him what I wanted. Thankfully God is very patient with us!

I eventually began to see God nudging me to become a priest. He opened my heart to the beauty of being a different kind of father. I graduated from the UW and worked as an engineer for two years
while I continued to pray and pay off my student loans.

Eventually I applied to the Archdiocese of Seattle and entered Mount Angel seminary in Oregon. I studied there for seven years and was ordained a priest on June 10, 2006.

I have been a priest for 11 years. Wow, time goes by so fast! My first assignment was as an assistant (parochial vicar) in the six parish cluster of Chehalis and Centralia. I was there for two years and was then made pastor of St. Frances Cabrini in Lakewood, WA near Tacoma. After four years there the Archbishop asked me to also be the pastor of St. John Bosco in Lakewood and the missions that are connected to it in Steilacoom and Anderson Island. For an additional four years I was pastor of all those parishes and missions. The last three years of that time Fr. Armando Red was the parochial vicar with me. My time in Lakewood was beautiful and very challenging. In 2016 I came to the Skagit valley as a parochial vicar. I needed a year to rest and heal. Which leads us to the present moment. 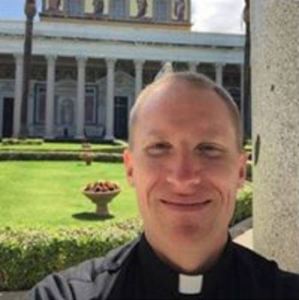